We had an interesting and exciting story shared with us by one of our customers the other day and we thought we’d share it with you! Here is what he had to say!

“It all started out as a normal day of pike fishing on Cobbossee at our family’s favorite hot spot on the lake (which is only around 3.5 to 4 feet deep).  It was Saturday, January 2nd, and there happened to be a state wide tournament going on; which added to the excitement of the day.  We had been fishing every weekend the same hot spot for the last five years or so. On average we catch 25-30 pike a day. We headed out before the sun came up and had our holes drilled by 6AM. Usually you cant even get all five traps in and you already have a few pike on the ice, but for some reason this particular Saturday was slow. As the day went on the fishing didn’t seem to get any better. The fishing was so slow we began to move our holes around. We have been spoiled for so long that the slow day (12 fish) had us impatient and searching for a new hot spot.  I put one of my traps way off in the distance in a deep hole that I knew of from summer fishing; just trying to change things up a little. It was getting late in the day and just as we were getting ready to pick up I noticed my flag off in the distance was up. When I got to it all my line was out.  I had a 6” bait on and knew it was going to be a huge fish. I began to pull my line in; it felt like I was hooked to the bottom. I’ve caught some big pike but this felt like nothing I’d ever felt before.  I kept saying “this fish is huge, its going to be a state record”.  I could barely pull the line in, as it was cutting into the edge of my fingers. I kept playing it out so not to loose it.  So many times before we’ve been too anxious and lost the trophy fish.  I was being cautious.  All I wanted was to see it, but every time I would get it close to the hole it would take off on me and I’d have to start bringing it in all over again. I was not going to lose this one! I had played it out for over 45 minutes and finally I had wore it out enough to bring it in.  I was so excited and nervous; my fingers were raw. The closer I got it to the hole the more intense it got.  I could see the braided leader and knew it was just 2 feet away. I said “alright I’m going for it, get ready to grab, its going to be huge”.  As I pulled the line up through the hole expecting to see the massive jaws of a record pike, instead it was a round head with beady eyes and whiskers…..It was an OTTER!  I was in shock and discouraged.  As I knew no one would believe me if I said “I caught an otter”, I let it go back down in the hole long enough to pull my phone out to get a picture. I wasn’t about to try to grab it. It was hissing at me and acting very distraught. The teeth on it were bigger than I had expected.  I pulled it up through the ice one last time to get a picture and then I cut the line free.  Lets just say I felt foolish for playing it out for so long for it not to be the record breaking pike I thought it was.  I wont be fishing that spot again…. we’ll be sticking to our regular hot spot.” 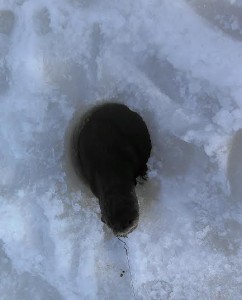