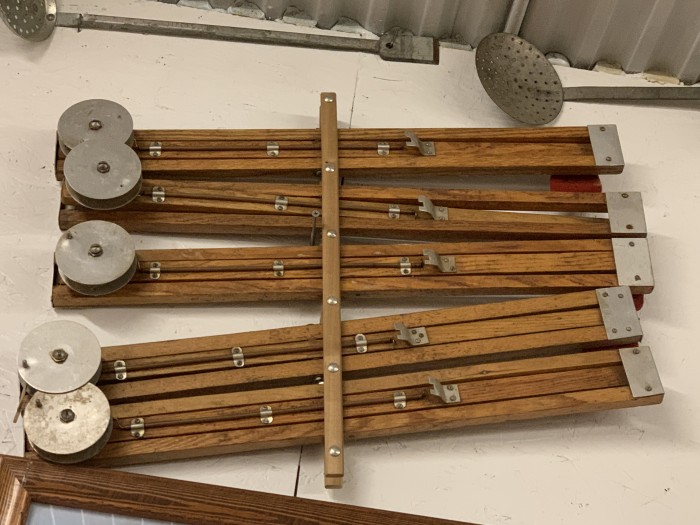 The first set of Jack Traps ever made.

In 1960, Phil and Barbara Jackson of Winthrop, Maine started taking their young son, Tim, ice fishing with them. This family activity turned into a life-long passion for Tim (also known as “Jack”)   and eventually became his livelihood.

“Right from the start, I was hooked,” says Jack. “My Dad was a very skilled fisherman. When I was a kid, he used to take me all over to compete in ice fishing derbies. Those are of some of my best memories. I will never forget the excitement of winning a prize and seeing a smile on my Dad’s face.”

“When I turned eleven or so, I bought my first set of ice fishing traps, also known as tip-ups. They were great, but after a couple of seasons the wear and tear really began to show. The tripper wouldn’t stay in place and it would freeze up. The reels would bend, and some would even come off.” “In 1979, I decided to build my own set of ice fishing traps.

Jack began making traps as a hobby and then as a small side business. Relying heavily on his experience as a fisherman, as well as his father’s advice, Jack set out to make the highest quality product he could. In the early days, he ran the business on his own with the help of his wife and four children as they became old enough to help.

Although Jack had been selling his traps since 1979, he took it on full time in 1994 after sustaining a back injury at work. “I just threw myself into it. I knew I couldn’t do what I had been doing anymore. I also knew that I loved building traps.” To get the business off the ground, Jack drove around Maine to sporting goods retailers and hardware stores showcasing his products. His traps were the highest quality product out there and many decided to take them on in their stores. Most of the stores who bought from him that very first year are still loyal customers today.

“In those early days, it was the smaller sporting goods stores that really sustained us.”

Jack Traps on display at the factory retail store

Over time things changed a bit at Jack Traps, Inc. Jack moved the operation to 151 Ridge Road in Monmouth, and the 600 square feet he had in his basement turned into 6,000. With the additional space a full retail store was opened where you could purchase all of the highest quality ice fishing gear available including bait, pack baskets, ice augers, sleds, tackle, clothing and any color of Jack Trap you could imagine.

Manufacturing processes became much more efficient with the extra space. Nothing was automated; every part remains hand crafted but having the room to work on different parts at the same time greatly increased capacity. The attention to detail that goes into to each part of the trap in the factory assures customers that their equipment will function to its fullest out on the ice. The trap’s wood is sanded, stained and dipped in two coats of marine polyurethane, preventing water and weather damage; all hardware is stainless steel or aluminum; and reels and trippers are packed tightly with lithium grease, eliminating freeze-up. 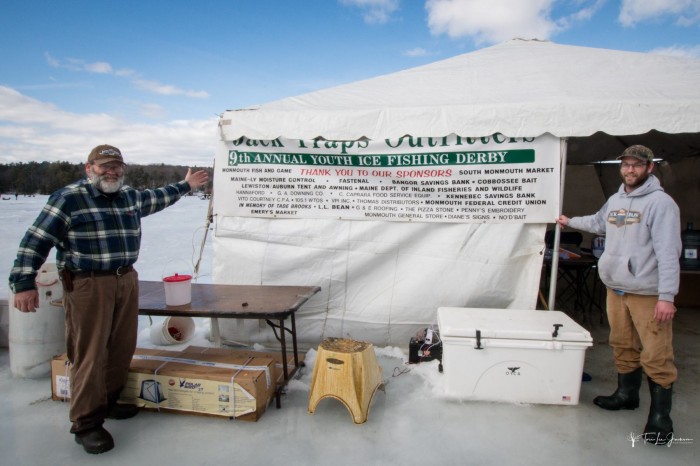 In 2012, Jack Traps suffered a major setback as Jack was diagnosed with esophageal cancer, a type of cancer that most do not survive. Luckily, he was diagnosed very early and doctors moved quickly with surgery. He came out of the ordeal cancer-free, but a lengthy recovery ensued after surgery. He simply could not continue doing his day to day duties the business required of him as he had in the past. Jack and his family set out to find alternative options for Jack Traps and in that search came across Shawn Norton, a new college grad with a passion for business and ice fishing, just as Jack had in his youth. Shawn was hired to manage Jack Traps business and he jumped in full force from day one.

Over the past six years Shawn has worked to grow the business and product offering with great success. With production and material improvements Jack Traps is producing the highest quality product they have ever made, and as Shawn says, “we are nothing without the quality!”. In the summer of 2019, the company’s 40 th anniversary, Shawn purchased Jack Traps from Tim Jack and looks to continue to carry on the traditions and passions that Jack Traps began with, a love for the sport of ice fishing!

With more products and inventory than ever available at the retail store in Monmouth and at jacktraps.com, Jack Traps is poised for its best year yet.