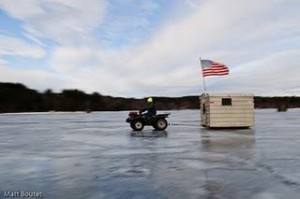 When setting up a shack, find a spot where the water is deep on one side and shallow on the other. A drop off provides cover for bait and may hold feeding fish. Position the shack so the wind isn’t blowing on your door. Bank the shack with snow to help keep the wind out. Block up permanent shacks a foot or so above the ice so they don’t freeze in. Sometimes too many fishing holes too close to your shack isn’t a good idea. After a good snowstorm, the ice will sink a little allowing water to come up those holes causing slush and freezing your shack. If this happens, move your shack and start fresh. Maintaining your ice shacks will save you a lot of headache later. Always secure your shack to the ice using wire or rope. Reflective tape is a good idea so the shack can be seen by snowmobilers and four-wheelers at night.